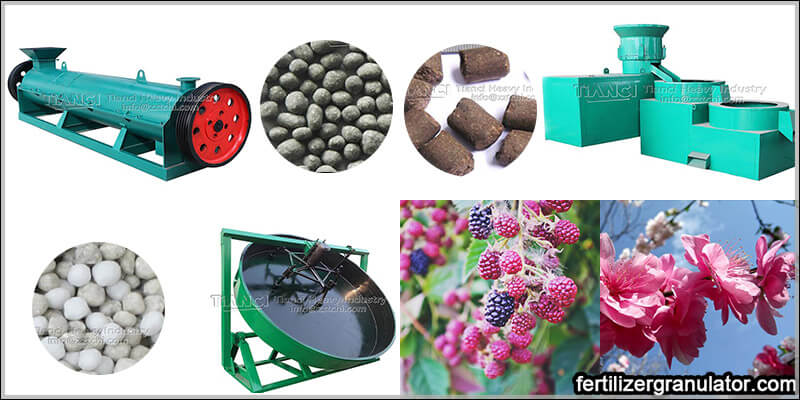 It is specially used for granulating various organic substances after fermentation. Without drying and crushing the raw materials before granulation, the spherical particles can be processed by direct mixing, which can save a lot of energy. There is no need for binder in granulation, and the granules produced are spherical.
Disc granulator
The granulator is an inclined disc. After mixing all the raw materials, it enters the disc and rotates. In addition, the spray water rolls into particles and dries them. The equipment is simple. The formulation needs viscous material and has certain formulation limitations.
Flat-die granulator

The machine has good granulating effect on organic fertilizer raw materials with low bonding rate, more cellulose and poor forming conditions. It is mainly suitable for crude fiber granulation, such as sawdust, rice husk, cotton stalk, cotton seed coat, weeds and so on. Flat-die granulator can make these raw materials into cylindrical particles, which can save a lot of energy. The machine can also be used for granulation of biological bacterial fertilizer, organic fertilizer and compound fertilizer.
The granules made by the flat-die granulator are polished by the polishing machine, so that the cylindrical granules can be rolled into spheres at one time, with good shape, high sphere forming rate and good strength. In the multi-function fertilizer granulating production process, flexible arrangements can be made, combined with the simultaneous use of new type organic fertilizer granulator and disc granulator, which can solve the disadvantages of single granulator which must be equipped with a single round thrower, such as complex process, large investment in equipment, inconsistent quality of finished products and so on.

Video of Multi-Function Fertilizer Granulating Production Line
Drying
Fertilizer particles are transported to rotary drum dryer for heat exchange with heat from hot blast stoves.
Cooling
The dried granules can not be packed immediately. They are easy to absorb moisture and agglomerate, which is not conducive to storage. They need to be transported to rotary drum cooler to cool fertilizer by natural or forced cooling air. At the same time, the dust of drying, cooling and workshop should be discharged after the treatment of cyclone dust collector or dust collector room, so as to avoid environmental pollution.
Screening
Screening of fertilizer granules is an important part of fertilizer granulating production line. The granules are transported to the screener machine. After screening, the fine granules are directly returned to re-granulation, and the large granules are crushed by the grinder and then returned to the material mixer.
Packing
The qualified products after screening are transported to the automatic packaging machine for weighing, packaging and storage. This packing machine can automatically quantitative pack powder and granules, suitable for flour, starch, feed, food, chemical industry, light industry, building materials industries.
The above fertilizer granulating production line has been tested and improved by our company for many years, and we can design process drawings according to customers'sites. Other fertilizer production lines can also be provided. If you are interested in our products, you can contact us directly, we will try our best to help you find the right product.